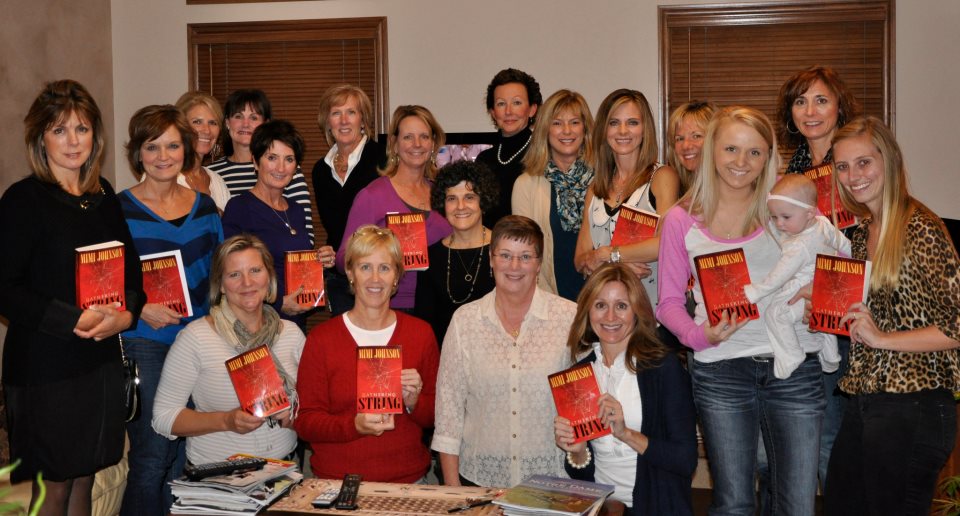 Mimi Johnson leaves for Iowa today for a book tour promoting Gathering String. In advance of the tour, she was a guest on KMA radio in Shenandoah, Iowa, Friday. You can listen to the full segment.

One correction: In the lead-in, the hosts refer to Mimi having “worked at” the Washington Post and Omaha World-Herald. She contributed to both publications as a freelance writer, but has not worked as a staff member for either newspaper.

A page turner. Did not want it to end.

And, just to be clear, Mimi Johnson has not paid for any reviews of Gathering String. Every review has been done by a genuine reader. The New York Times reported today about reviewers for hire. This author/publisher does not follow that practice.

Details will come soon, but she has already scheduled her first two Iowa events. She will be in Iowa the week of Oct. 1-6.

This is the ideal time and place for a Gathering String tour. Barely a month before this November’s election, an Iowa native will return to her home state to discuss her novel about the mystery surrounding an Iowa governor’s presidential campaign. Johnson grew up in Essex, Iowa, and has lived in Shenandoah, Des Moines and Cedar Rapids. She was a student at Iowa State University.

Iowa bookstores, libraries, book clubs and journalists can email the author at mimi (dot) johnson (at) me (dot) com to schedule readings, interviews and book signings.

The print edition of Gathering String is available in time for the Iowa book tour. The Kindle edition, published in March, has been downloaded more than 10,000 times. Thirteen of the book’s 18 Amazon reviews have given the book a top rating of five stars.

“Loved this book!” wrote Carla Offenburger, whose Iowa book club is making plans for a visit with Johnson during her Iowa tour. “Every page was worth it,” Offenburger said in her Goodreads review. “I miss the characters and hope I get to see them again in a future sequel. Johnson creates a wonderful story around politics, journalism, love and family. Highly recommend it.”

Others praising Gathering String have been Tim McGuire, former president of the American Society of News Editors and now a journalism professor at the Walter Cronkite School of Journalism, Andrew Beaujon of the Poynter Institute, and authors Don Fry, Buffy Andrews and Richard Hine. Iowans praising the book have included journalists Rae Riebe and Brian Smith.

The tour also could include a stop in Omaha, where Johnson studied creative writing at Creighton University.

Readers have blamed Gathering String for neglected chores, sunburn on the beach and for sitting by an outlet to keep reading after an iPad’s battery ran down. Bring Mimi Johnson to your bookstore, library or book club, so your community can see why readers can’t put this book down. 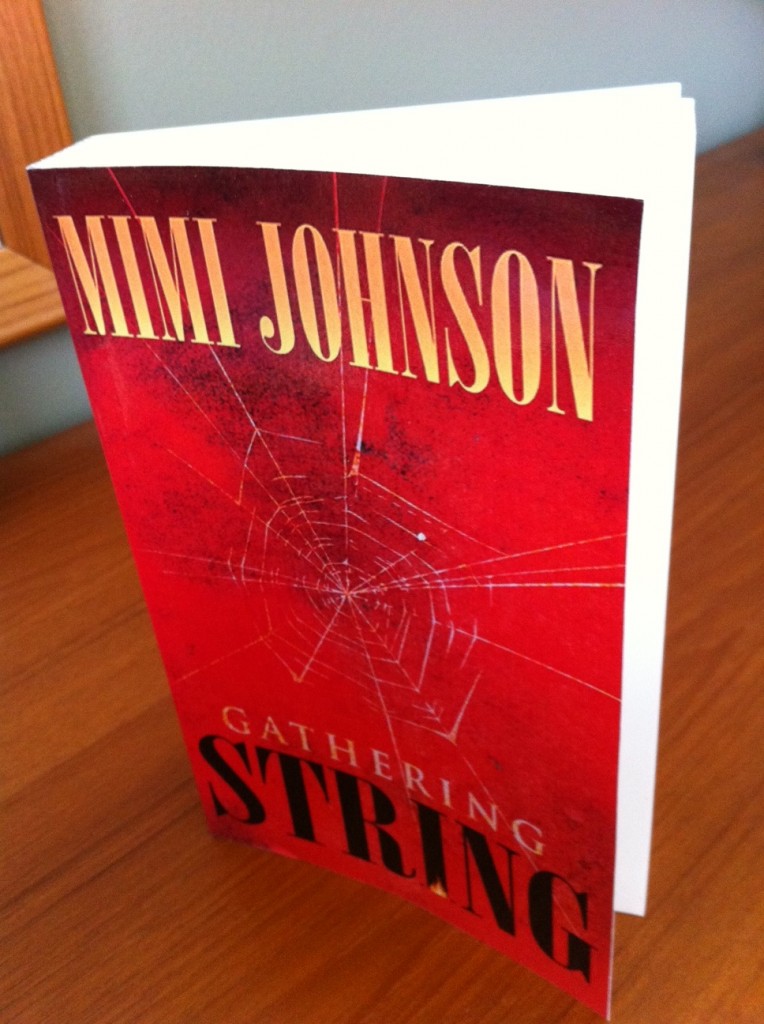 The print edition of Gathering String is now on sale. You can order the book for $16 through Amazon now, and it should be available through normal distribution channels to bookstores in a few weeks. You can also buy the Kindle edition of Gathering String for $5.99. You don’t need a Kindle to read the book. You can read it on the Kindle app for iPad, iPhone or computer. The Kindle and print entries should be synced shortly so the Kindle reviews will show up with the print listing. If you want to read the reviews before deciding whether to buy the print edition, they are all compiled here, 13 five-star reviews out of 18 total reviews. In addition to the reviews, Gathering String continues to draw enthusiastic responses on Twitter:

@stevebuttryHa … was curious about whether it was. Tell her I am enjoying the book. @mimijohnson — Francis Materi (@fran_the_man) August 11, 2012

Johnson has an ear for sparkling dialogue and a flair for dramatic pacing. Her dry wit made me smile, and her portrayals of Iowa, small-town life and the nitty-gritty of the news media are spot-on. The action unfolds quickly in the last quarter of the novel. I can’t remember the last time I stayed up most of the night to finish a book. I highly recommend “Gathering String.” It is a good read, and a timely one, too. Not just because this is an election year, but also because the book explores journalism ethics in a 24/7 news cycle.

Mimi Johnson’s “Gathering String” is a finely crafted mystery and an intriguing study of complex relationships that you won’t want to put down until you’ve read it to the end.

Gathering String is $5.99 on the Kindle Store. You can read it on the Kindle app for iPad, iPhone or computer if you don’t have a Kindle. A print edition will be coming out soon.

Gathering String has 10 five-star reviews on Amazon, two-thirds of all its reviews. The latest review, by “SBurke,” says:

This is such a fun, suspenseful, and entertaining book! … When I finished Gathering String, I found myself disappointed that I had come to the end of the story. But a book’s ending can either make it or break it … and this ending was perfect.

I was moved to buy a Kindle just to read Mimi Johnson’s novel, Gathering String because Kobo/Indigo isn’t yet carrying this title (we already own a Kobo). Glad I did. I thoroughly enjoyed the book, especially the twists and turns involving the many interesting, authentic and flawed characters. … This book could also serve as an ethics study in journalism schools because, `tho it is fiction, the heart-wrenching challenges facing the principals mirror real-life in current-day newspaper and online journalism.

Buffy Andrews continued her praise for Gathering String on Twitter last night, bringing some hints from author Mimi Johnson about the sequel she’s working on:

@Buffyandrews Yes. They were rewritten many times.

@mimijohnson Good luck! Knowing Sam, that will be interesting. He likes being in control. Ahem. — Buffy Andrews (@Buffyandrews) June 15, 2012

@Buffyandrews I tend to think Sam is just a good character. I’m planning to really push him in the next story.

Gathering String is free today at the Kindle Store (the price goes back up to $5.99 Sunday).

Lynn Hicks of the Des Moines Register wrote about Gathering String (second item in the linked roundup), saying the novel was “getting strong reviews from Iowans and journalists around the country.”

Another of those reviews came this week on Amazon, from Iowa journalist Brian Smith: