Higgerson, who praised Gathering String early in 2013, featured it second in his post of 13 books by journalists to get you through Christmas:

This was the book which led to me starting 2013 with bags under my eyes.

In his January post, Higgerson said he was sleep-deprived after late night’s reading the novel:

You know when you think you don’t have time to read, then start reading a book when you get chance and then everything else that can be put to one side tends to go that way? This is one of those books.

That makes 29 5-star reviews (and seven 4-star reviews) out of 37 total Amazon reviews. In case you’re not finished with your Christmas shopping … 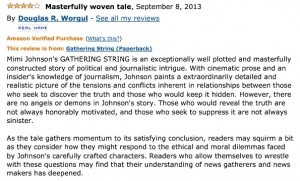 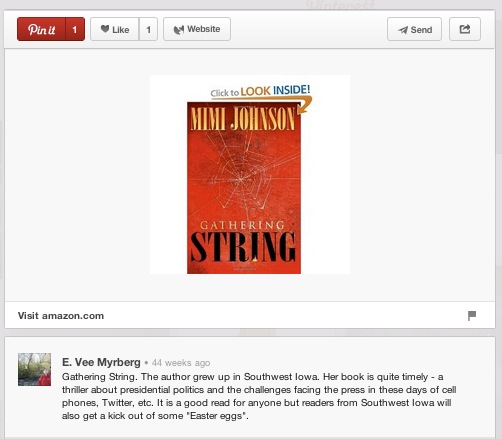 The review is the 26th five-star review for Gathering String, out of 33 total reviews.

Thomason continues in his praise:

The author weaves in the uncertainty and turmoil of today’s business of journalism to add incredible authenticity to a ripped-from-the-headlines story of tainted power – it is about politics, after all.

Grab a copy of “Gathering String,” kick back, and prepare to love and hate the genuine characters of Mimi Johnson’s first (but I hope not last) captivating novel.

In the latest 5-star Amazon review of Gathering String, Mark Loundy (who read the Kindle version on his iPhone) calls the novel “refreshingly unpredictable”:

Classic anti-hero, surprise villain, and a we know whodunit but how are they going to prove it plot. Lots of fun.

@mimijohnson When the governor fired his press aide, the whole book shifted gears. The hook is set deeper.

In another recent 5-star review, Robert Apperson, who read the paperback edition, says:

I live in SW Iowa so locations were real to me. very good reading, just hope there in a followup book or two.

Yes, Mimi Johnson is working on a sequel. No projected publication date yet.

I’ve been asked a lot of questions in the year since Gathering String was published. I was prepared for some of them:

Some caught me off guard:

But there was only one question I had a hard time answering:

The following April, two related items ran on the same day on Politifix’s “Informed Sources” gossip blog. The first came under the subhead “Wow, did you see …”:

Jack Westphal, running through D.C.’s Reagan National Thursday afternoon? Yes, it was the hunky Iowan, and just about every head turned to watch his mad dash to the gate.

It’s been a rough seven months for the legendary “Waterphal” writing team. By all accounts Westphal, who continues to publish his small newspaper and website, has struggled to weather a fair amount of outraged public opinion over his outing the dirty secrets of his former-brother-figure (and recently indicted former Republican nominee) Swan August Erickson. Opinion on Westphal’s whistle-blowing is mixed, especially in his own hometown where feelings run high, particularly since the Governor’s brother Peter committed suicide last September. END_OF_DOCUMENT_TOKEN_TO_BE_REPLACED 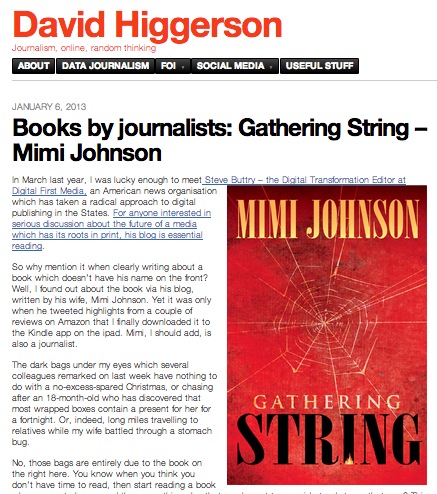 END_OF_DOCUMENT_TOKEN_TO_BE_REPLACED

Gathering String is a “political intrigue” with “believable characters and … authentic voices,” says one of two recent reviews on Amazon.

“I highly recommend this first novel and look forward to more pleasing diversions from Mimi Johnson,” wrote “Angela_says” in a 5-star review.

Chris Hubbs mentions Gathering String as one of his five favorite books of 2012 (out of 59 he read this year):

A top-notch suspense/mystery novel whose author is a lovely lady I met once at a tweetup in Cedar Rapids.

Another 5-star review by “Mrs. Cooper” continues the praise:

I enjoyed this story from beginning to end, even during an election year!

Gathering String also continues to get praise on Twitter:

Finally getting into @mimijohnson‘s Gathering String. Only 30 pages in. Already hooked!

At the point in @mimijohnson‘s Gathering String that I’m OK w/my kid destroying my house so long as I can get through just one more chapter.

Finished “Gathering String” by @mimijohnson last night. Wow. Every journalist should read it

The novel was published as an ebook on March 18 and had more than 10,000 downloads in 2012. The electronic version is sold through the Kindle Store, but you don’t need a Kindle to read it. You can read it on the Kindle app for tablets, smartphones and computers. The paperback edition came out Aug. 8.

Mimi Johnson promoted the book in bookstore, library and book club appearances in Iowa and Ohio in October.

The banter between the characters was believable and entertaining. And their flaws were human and endearing. The story had enough twists and turns to keep me turning the pages to find out what would happen next.

Right from the start you are caught up in the characters!

That’s 24 total Amazon reviews of Gathering String (two reviews are repeated on the print and Kindle listings), with 17 giving the novel 5 stars and six awarding 4 stars. You can read the Kindle edition on an iPad, phone, computer or other device using the Kindle app.